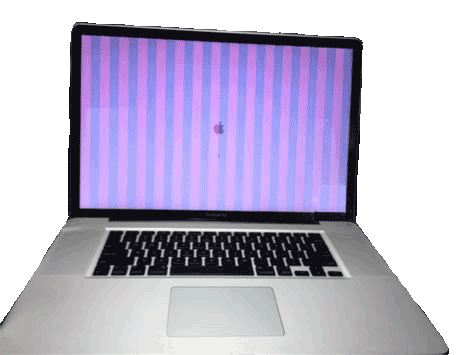 Some MacBook Pros have defects that cause the GPU (Graphics Processing Unit) to fail.  The most popular theory is that excessive heat melts the solder over time, which breaks the contact between the GPU chip and the logic board.  There are millions of MacBook Pros out there that are ticking time bombs and need to be fixed.

There are many different symptoms that could indicate GPU failure:

While Apple's solution is to replace the logic board at a cost of about $600, there is an easier solution.  Using a $20,000 logic board rework station, the remaining solder on the GPU chip is melted and the chip is removed.  New, lead free solder is then used to solder the chip back into place.  This is called a reflow, and it fixes the problem more than 90% of the time.

Your cost for this service is $99 plus $15 for Priority Mail return shipping, and we have seen retail prices anywhere from $149 to $199 and more for the service.

You need to ship us just the logic board.  A handling fee of $60 will be charged if we have to remove the board.  If the GPU has not failed or the board has been worked on before there is a diagnostic fee of $49.